*This sermon was given without notes and does not match this manuscript exactly. Given on the First Sunday of Lent at Santa Fe Episcopal Church in San Antonio, TX. The sermon is mostly in English, with Spanish sprinkled through as I continue to learn.

Or who has ever stayed in bed when you know you could be out washing the car or doing other chores? Who has ever skipped church when you felt like you should be there? Who here has ever worked an extra hour at your job instead of going home to your family? Who here has ever pretended to not see the person standing at the street corner and asking for money? We know what temptation is. We know the feeling it leaves in our gut when what we want to do and what we know we ought to do don’t line up.

And so here at the beginning of Lent I have one question. What does the devil look like?

I ask because as we follow Jesus these forty days into the wilderness, I want to know what to look for. I want to be prepared, so that when the devil comes up to me, I’ll be ready. What does the devil look like? 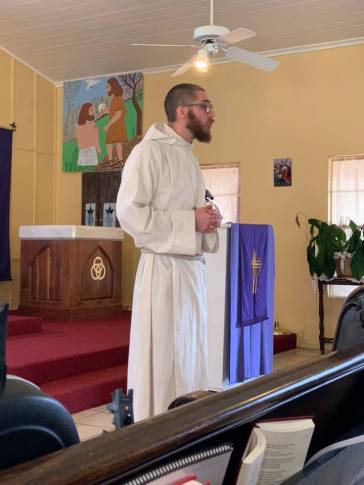 I always find it interesting to see the ways that movies decide to portray the devil. You have the classic horned figure with a pitchfork, a tail, and in red. I’m remembering the Passion of the Christ where they have a non-traditional image of the devil as a hooded figure—a woman—with shaved head and eyebrows and no makeup. It makes me wonder about the underlying assumptions there about women and gender roles. Then a few years ago the History Channel came out with a series called the Bible and they portrayed the devil, again, as a hooded figure, but this time as someone who oddly had a strikingly resemblance to Barack Obama! That was controversial for them so when they turned the series into a movie they left that character out. I think my favorite portrayal of the devil comes from a movie called Last Days in the Desert. Have you seen this? The movie actually imagines the story in our Gospel today of Jesus being tempted in the desert. In the movie Jesus is played by Ewan McGregor and the devil is played by….Ewan McGregor. And so throughout the film you have this eerie image of Jesus being tempted in the desert while he is looking at a mirror image of himself.

II. The True and False Selves

I think that’s interesting for us because isn’t that how we experience our own temptation. We hear a voice in our heads that sound strikingly like our own, begging for us to feed it.

We have one self that’s just trying to do the right thing and another self that just wants to do what it wants to do. This image of two selves is actually present throughout Christian history, especially in Christian mysticism. Thomas Merton, the Trappist monk, calls them the true self and the false self.

And what is the true self? The true self is the person God created you to be. You are the beloved child of God.

You were made in God’s image and God loves you. When you were knit together in your mother’s womb God knew you and loved you. Your truest self still lives with God in the garden of Eden. You are God’s child and God loves you.

This image of two selves is common in other traditions as well and reminds me of the story of the two wolves that has been attributed to the Cherokee tribe, although after doing a bit of research there is some debate about where it comes from. But the story goes like this,

So how do we end up feeding the false self? Another Trappist monk, Thomas Keating, says there are three primary ways that we feed or construct our false self.

We become obsessed with our survival and security and we become anxious about where we are going to live and how we are going to pay our bills. And of course there is nothing wrong with knowing how to pay your bills, but when all your identity, when your very happiness depends on your own survival and security then you know you’ve moved away from your true self where you know your truest home is in God and have started feeding your false self.

We become obsessed with the affection and approval of others, with how people see us, and we become anxious about not wanting to disappoint anyone. And of course there is nothing wrong with not wanting to disappoint others, there’s nothing wrong with wanting people to like you. But when your identity, when your very happiness depends on the way other people see you, you’ve moved away from your true self where you’ve already received the greatest affection you could hope for, and started feeding the false self.

In every temptation we face, there is a temptation to forget who we really are and to instead create a false self that clings to our own survival and security, affection and approval, and power and control. It’s not always obvious that that our motivation, but if you look deep enough, you’ll find often these three are at the heart of what often drives us.

III. Jesus in the Desert

What happens when we place Keating’s lens of these three ways onto our gospel passage today? Well, first, what we don’t see in our gospel today because it comes just before this passage is that Jesus was just baptized and as he came up out of the water he heard a voice from heaven affirming his true self, this is my child, whom I love. How much more affirmation can you get than that?

And then he whisked off into the desert where he faces his temptations, and after fasting for forty days and forty nights he faces his first temptation—to meet his own material need—because he is famished. Survival and Security. Sobrevivir y la seguridad.

And then he’s taken to the top of the temple in the holiest city of Jerusalem where all of the important religious people are going in and out and having their important theological conversations. And Jesus knows if he throws himself off he will be caught up in the arms of angels right there in front of all those important religious people and they will know right then who he is and have no choice but to accept him, to follow him, and to worship him. Affection and approval. La afecto y la aprobación.

And finally he is taken to a high mountain where he can see all of the kingdoms of the world and the devil tells him if he just gets down and worships him he can have all of them, they will be his, think what you can do with them. Power and control. El poder y el control.

In each temptation, Jesus is facing a temptation to forget the self just affirmed as the child of God at his baptism to feed and cling to a false self apart from God the father.

And the same is true of our own temptations. We are tempted to forget our true self, the self affirmed as a child of God, first in our very creation, and second in our baptism in order to create our own version of our self.

The internal work of Lent, then, is evaluating the ways that we have forgotten who we really are and the ways we have started to create our own alternative false selves. What drives you? Is it the defending of your survival and security? The desire for affection and approval? The need for power and control? Or is it a simple and deep trust in the God who loves you more than you can imagine?

The world can be a hard place to live, and sometimes the forces that be push us into clinging to these things. When our survival and security is threatened we are pushed to defend it. And that’s why it is so important to remember who we really are: we are God’s beloved children. That’s why we come to church and celebrate life, death, and resurrection of Jesus because we worship a God who, even in the midst of suffering and persecution, unwaveringly lived not according to who the world said he was but to who God said he was, a child loved by God. He knew his true self. And being firm in his true identity, he didn’t go right away to that temple where all the important religious folks were, and he didn’t go right away to those kingdoms where all the important politicians were, no, we see in the very next passage he went to Galilee, the place of the poor and oppressed. Instead of wasting all his energy trying to prove himself, he spent that energy loving the least of these.

I encourage you, then, as we make our journey towards Easter to pick up a practice or fast from something that will help you remember who you really are, you are a beloved child of God.

I’d like to close today by hearing our gospel passage again, but from a slightly different perspective. I want you to hear it this time as if its your story. So first, there is a baptism. It’s your baptism. And as you come up out of the water you look up and see the heavens open and the Spirit come down on you like a dove. And a voice from heaven calls out, “You are my child, and I love you.” Tu eres mi hijo, y te amo. And it’s such a perfect moment that you don’t want it to end, but before you know it that same Spirit drives you out into the desert to be discomforted. To be challenged. To be tempted. To doubt the very words of God you have just heard. And after fasting forty days and forty nights you are hungry. You’re famished. And at that moment the devil comes to you and says, “If you are the child of God. Go ahead and turn this stone to bread.” And when you hear his words even more than the rumbling of your stomach you feel a fluttering in your heart. Because you know that the assumption behind his words is not so much about the food (although you are hungry) but about who you believe yourself to be. It’s been forty days and maybe you don’t feel so much like a child of God anymore. You don’t know where God is. After all, wasn’t it God’s Spirit that led you out here in the first place? And you know that if you turned the stone to bread that maybe you would feel like God’s child again. If you could just do something you might again believe the words you heard weeks ago. And so the devil tempts you, “if you are the child of God, turn this stone to bread.” What will you say? How will you respond? Trust in God’s words.

You are my child, and I love you.